Denisa
- "A life without a bit of craziness is not worth living". - I'm a thinker, even though I often live life with less thinking. - "Rules are made to be broken."

Listening to what others say and asking your friends what bothers them most about you might be tough; but there’s a lot you can learn. Everyone forms a judgment. They see you through their own lenses and the life experiences that shaped them. So instead of telling them: “You’re judgmental”, I simply say: ”You haven’t walked in my shoes”. 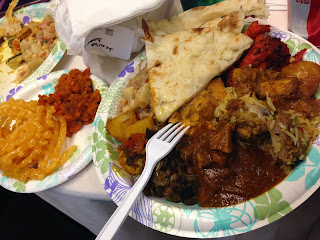 Take, for example, what some would refer to as “food wasting”. Surely you have heard some remind you that “there are starving kids in Africa…”. Well, when given the chance, I invariably order too much food. And, yes, even when I just order the regular “American size” portions, regardless of how good the food is, I almost always stop eating before the plate is empty. When I feel full, I stop and I take the rest to go.

One of my friends, who always makes a point out of licking his plate clean (not literally), told me, not long ago, that he finds my behavior wasteful. And, invariably, brought up the hungry kids all around the world. I felt quite bad for a minute and tried to consider why I never pictured that I was wasteful in my actions before hearing it from him. It’s true, by any account, getting more food then you can eat is inconsiderate, to say the least.  But here’s how experiences shape one – even when they can’t quite absorb it. I grew up under communism, at a time when half a loaf of bread had to last you a week (until you were legally allowed to buy your next ration). I had to learn to make a cube of chocolate last for months, by only tasting one small bite each day. And, while I never consciously thought about it, to this day I save food. I may seem greedy and unapologetically oblivious to the starving kids of the world. But the reality is, your own pain is always bigger than the pain of anyone else. Eating all my food won’t help those who, by misfortune of birth place or circumstances, don’t have any. But saving my leftovers for tomorrow may very likely save me.
So, yes, if I am full, I won’t finish my plate. I’ll keep that for the next day when I might not feel like cooking, or simply won’t afford to buy any more food.

I don’t believe that you can help others when you can’t even help yourself. But I do believe that saving others can sometimes help you save yourself.


Oh, every-so-often,
We each have a devil to fight...
Can never make up for
Illusions that we’re always right.

God send me an angel of light
To shatter my pain with his might
Or give me the strength to forget;
Rebuild my fortress of strength

I’ve cried all my tears
And whispered my fears
I’m broken and tied at my thigh
By a huge, scrumptious lie

Miracles happen
If you stay alive
And keep on fighting
The devil inside.

I tendered a pact with myself
To rise above
Such shallow stunts
That make my peace become dark.
We all need an angel sometime
To remind us how magic we are
To make us grow strong
To help us hold on
Build up our drive,
Deal with the heartbreaks of life
It’s how we survive
The devil inside

Yesterday mattered
Tomorrow's gone.
You won the battle, but lost the war.

Live as if today is your last day
Don't let the hatred poison your way.
Victim by fate, survivor by strength,
My greatest wealth is
just feeling content.

Each deep breath that I take
Fills my lungs with life.
I'm grateful for smiling
each tear that I cried.

I feel my minutes slip through my fingers
Wasting my life each moment I linger.
Choices I make, they
make me or break me
If gold is God, then I'm still a slave.
Looking so shiny, makes my palms tickle
Master, I swear I'll behave!
Yesterday's $ is worth a nickel,
Wisdom seemed frail (penny for your thoughts)
Yet it's gold. (Smarts can win you lots)

Yes, I want power and I want riches
But time is a hunter
And this animal's dead.
So I take comfort over all riches,
I'll let go grudges to be content.
Posted by Denisa at 8:39 AM No comments:


I think of all the experiences that formed me; the tough road to becoming myself. Growing up takes time and it takes... life; living life. Making sacrifices, studying for endless exams, one more important than the other, learning to survive, being hurt in love, getting your first job and building yourself up to become the better person your parents would be proud of calling "their child".
Each of us is a universe of tears, and dreams, and laughter and hopes. Each of us is unique, and different and a miracle of nature in all its glory.
If this was a well told blockbuster story, we’d all pull for the main character – regardless of which one of us that may be.
So I don’t get the words “they were killed”. How simplistic is that to express that a universe ended?

Fantasies like the Bible and the Koran (and any other variations differently named), written by people – like prophets and saints -  interpreted by people – be it priests, or popes, or imams, or rabbis – have become the ruling codices and means of indoctrinating misguided individuals.
So many of us are atheists nowadays; and even more of us, agnostic. Or stuck in a cruel Richard Dawkins dilemma – “world’s most famous” empirical atheist who confessed: “I can't be sure God does not exist.”
I was born a Christian. A Greek Orthodox Cristian, from a heritage of Zalmoxian faith tribes. Yep, as it turns out, there was a one God belief before all the Old Books were written. Faith, thus, runs in my veins. But not as a strict set of rules, any longer. More as an unwritten wisdom I’m only so lucky to be able to tap into. Like a spring in the desert filled with reality shows, made-up beliefs and “no limits”.  God to me is… It’s like having no hope and yet knowing that a miracle could save you.

“Meden Agan”… “Nothing in excess” – says an age old inscription scribbled on Apollo’s temple at the Delphi Oracle. Meanings reverberating through the pages of time from Buddhism to the “middle path” of the Kantian philosophy and further on. It’s been a guiding light in troubling times for me. If there’s a balance in the universe, which, well, there seems to be, than each extreme meets an extreme. Each excess counters another. And I’m not sure if excess love smothers extreme hate, but it seems neither win. For as different as they may be, these are deeply the same.
Makes you wonder: is this “middle road” really the “safe” choice? Some say you don’t really live life if you always “play it safe”. Yet you die every day, just the same; maybe only less fast. You can experience excess through the eyes of those with a death wish. And, in fact, that is very much desired. Information is a great tool for survival.

I was born in a land once called Dacia. A land of strong willed but kind legends who stood up to invaders, while also welcoming foreigners in their home and offering their best comforts and meals. Maybe that’s why America feels like “home” too.
My people took pride in giving you “the coat off their back”, as long as you didn’t become the snake that bit their hand to inject venom and take advantage of your host’s generosity.
They say history repeats itself. And that “if you don’t have any elders, you should buy some”. Our elders still sing ballads of times when Ottomans invaded our lands. You may have heard morphed versions of those stories.  Vlad the Impaler, Prince of Wallachia, might  ring a bell. It so happens that Wallachia was one of the 3 provinces that made up the ancient Dacia (today’s Romania). Vlad was born on Wallachian lands, but was captured and grew up as a prisoner, learning the cruel ways of his later enemies: the  Ottomans. Which lead him to understand that one extreme can only be "impaled" by another.

I often look at the world today… “Fighting ISIS”. History repeats itself in modern versions – wise say.
Have we become any smarter?
Posted by Denisa at 4:30 PM No comments:


I am your memory of me

I am when time stood still.
Unsummoned tempest of your sea,
In search for an uphill.

I will forever be within
the happy and the sorrow,
the sparkle of your Eden glow,
the tear when heartbreak thorn us.
I am the comfort and the pain
I am the omnipresent.

You'll think of me when you can't think,
Yet you'll forget the shallow
I'll disappear with every blink
You'll grow beyond my shadow.

May what I gave become a stem
May what I took be given
For though I WAS, today I AM
Forgive all that's forgiven.